As you already know by now, PowerShell V3 is here with lots of new command to help manage your computer system.  But, don’t take my word for it, if you’re at the BUILD Conference, don’t forget to attend Jeffrey Snover PowerShell Sessions: http://www.buildwindows.com/Sessions?q=PowerShell&x=0&y=0

There’s a possibility that Jeffrey’s BUILD sessions will be recorded and can be viewed later on the following address: http://channel9.msdn.com/Events/Speakers/jeffrey+snover

To download Windows 8 Server and/or Developer Preview editions, look in both your MSDN Subscription, and/or at the following link: http://msdn.microsoft.com/en-us/windows/home/

The installation started with executing the downloaded *exe: en_windows_server_developer_preview_with_hyper-v_virtual_machine_x64_735222.exe

This executable will extract a VHD file:

Now, this VHD is good if you a media were you can boot from a thump-drive, or use the Windows 7 Boot from VHD feature.

Now, you’re better off downloading the ISO and burned it into a DVD.  So, look for the “Windows Server Developer Preview (x64) – DVD (English)” in your MSDN Subscription.

I lost my BootMgr!

Yeap! I was trying to use the Boot from VHD in Windows 7 but the documentation out there doesn’t tell you to activate the attached VHD and make it active to boot.  So, I try a couple fo things but to end up with “… Bootmrg is missing …” message.  Well, how can I resolved this new issue.  The answer was found in Microsoft Answer: “windows 7 bootmgr is missing– resolved using WinRE” – http://answers.microsoft.com/en-us/windows/forum/windows_7-system/windows-7-bootmgr-is-missing-resolved-using-winre/8bb148bc-8035-4847-9696-888f7a0a9720

So, I prepare a recovery DVD using the “Create a system repair disc” found in the “Backup and Restore” section.  It works like a charm! 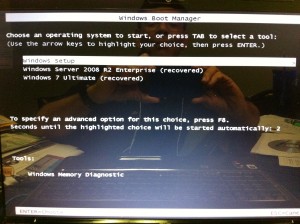 Back to Windows Virtual Machnes

By the way, I did try to create Windows 8 VM’s in both Windows 2008 R2 Hyper-V and Windows 7 “Windows Virtual PC” but didn’t work. 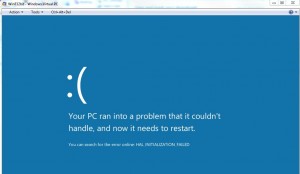 On my laptop, I decided to install “Windows 8 Server w/Hyper-V” over my “Windows Server 2008 R2 SP1”.  This way I can start setting up my new VM’s and see how the my older ones work under this new OS.  This installation took about a couple of hours with a series of reboots. 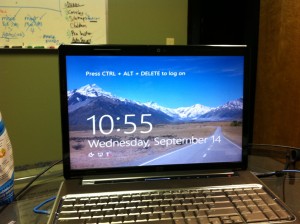 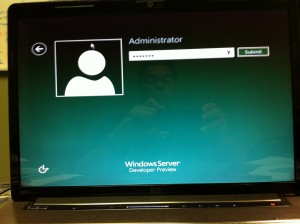 Before, creating my VM’s, I needed to install the Hyper-V role and enable PowerShell ISE using the new Server Manager dashboard: 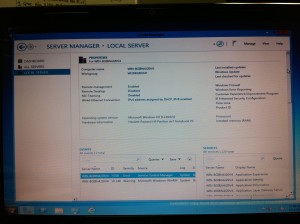 When you click on the Windows Flag to look for your application, it will take you to the new Start menu: 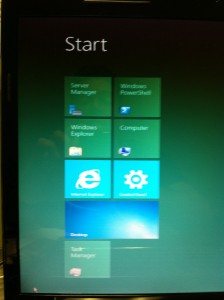 You will notice that “PowerShell” is available next to”Server Manager“.  We click on Powershell and enter the $PSVersionTable to check version: 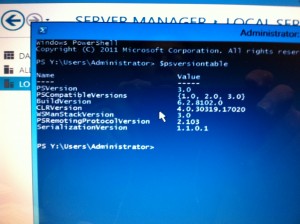 As you can see, this is PowerShell Version 3.  This version comes with a total of 56 available Modules, 521 Cmdlets (excluding Modules command), 637 functions, and 146 Aliases.  You got plenty of learning opportunities with this new version. 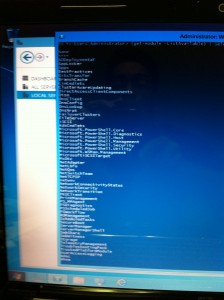 Now, As you all know, under the server features you need to “enable” PowerShell ISE.  I try to use the Classic “Control Panel” but it didn’t work for me.  So, you need to use the Server Manager, and click on the Manager Menu to get to “Add Feature” option: 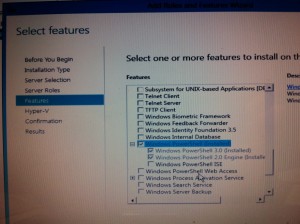 After you have selected both Role(s),and Feaures then you’re ready to install them: 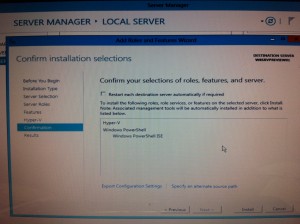 When the installation is completed, you will find PowerShell ISE ready to use from the new START menu: 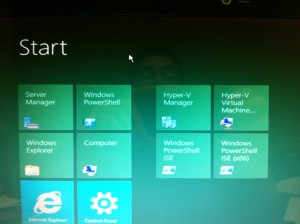 After having installed Hyper-V, I was able to create both 64bit version of Window 8 Server and Desktop. 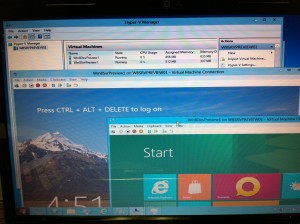 Now, how do you Shutdown your Windows 8 Server?  Just do a Ctrl-Alt-Del and then at the “Shutdown” button found at the bottom right of the screen.

Big Hint!!  Just found this tweet about booting from VHD: “New Blog: How to Boot from VHD with Windows 8 Developer Preview: http://t.co/JIBBQze3“